Information in this wiki applies to Hellgate: Global, which was shut down in 2015. It might not be accurate for other versions of the game.
Some information might be relevant to the 2018 Steam release because it's based on Global. For information more relevant to the original Hellgate: London release and Test Center content, check out the London 2038 wiki. 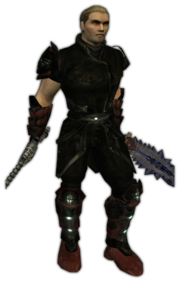 Blademasters are primarily melee specialists, however they do have ranged offensive capabilities in both skills and weaponary.


They deal the most damage out of the two melee classes (the other being Guardians), however may lack survivability in comparison to other classes.


Blademasters have access to the same weapons as the other Templar which are: Swords, Homing Pistols, Flamethrowers, Machine Pistols, Hand Grapplers, Nova Guns, Grenade Launchers and Shields.

The defensive choices are +armor, +hp, and +resists - in that order.
The offensive choices are +crit and +damage.
According to my understanding of game mechanics (e.g., see damage wiki page) the latter (+damage) is very ineffective, and you should only put points into this after maxing out others.
That being said - my very first expertise point was in +Luck, which I understand is actually working now.
I then put 10 expertise points into +armor, one into resist, three into +hp, and then the next 10 into +crit. This'll get you to mid-rank.

Most BM's go straight to 55 and then get ranks, since Plague-Grinders are so cheap and so superior to any other sword you can get (excepting possibly Beamcarvers, though Plagues generally do more damage).
You're going to do good damage and you have 3 mod slots for CCM mods - so crit becomes really important.
Its easy to get near 50% crit rate, and with good swords, get enough CCM to demon/beast to push your effective crit for those mobs up to 95%. So, you're going to do good damage.

In order for your good damage to mean anything, you're going to need to stay alive - and this probably means +armor expertise points first.
I've chosen to get my hp up to 4k and leave my total armor at 800 (73% absorb) - which means both AA and +hp% on every piece of gear.
Some mid-rank BMs stay at 2.5k~3k hp and get their armor above 1100 (79% absorb) - which means both AA and +TAV% on every piece.
Its really important to note that +TAV% gear scales your +armor expertise, while +hp% does not scale the +hp expertise.
This is why you want to go with 10 points in the +armor expertise first, certainly before +hp, and probably before +crit.
There is still some discussion about how effective the +damage expertise is, but at this point, I'd certainly put it last.
The offensive choices are +crit and +damage. According to my understanding of game mechanics (e.g., see damage wiki page) the later (+damage) is very ineffective, and you should only put points into this after maxing out others.

Devine Fury 6/7 - Pure increase to crit %
Aura of Zeal: 9/10 - Your Aura of crit, increases base % to crit and adds 2% crit per mob in aura radius.
Surge of Restoration: 6/7 - Absolutely essential for BM Survivability combined with WW.
Surge of Wrath: 6/7 - Absolutely essential, increases crit chance.
Surge of Mentality: 1/7 - Optional, although a surge proc to recover some power dosent hurt for 1 point.
Surge Mastery: 6/7 - Very essential skill increasing % chance to proc surges and increasing surge duration.
Sweeping Strike: 3/10 - 2nd favourite attack, remember once WW cools down and ur surrounded still?
Whirlwind: 9/10 - The most used and highest DPS attack available.
Parry: /10 - Won't work 1v1 against bosses, although based on the BM's survival I recommend spec'ing what you can afford will help survivabilty
Charge: - Optional, good for 1 point spent.
Matched Blades 6/7 - no brainer you will need this to equip everything.

Sword suggestions in order:
Dmitriy's Glory
Falchion of the Fiend
Yongkwang Sword
The Eradicator
The Edge of Abbadon

In conclusion, the Blademaster is the highest dps Templar. Able to effectivly solo in all difficulties.
With access to Whirlwind BMs' are very effective in Stonehenge (SH) groups via pulling and killing mobs and doing their fair share of the work.